Hovering over the dashboard icons gives you tooltips explaining them, but for those Squids waiting for their lenses to transfer, a quick overview:

I have a few “unfeatured due to lack of engagement” hubs. I may massage them to try and drive more traffic to them. Or I may just ignore them. Once you’ve published many hundreds of articles, having a few that have fallen out of circulation is no biggie. In fact, it may be useful to learn from: why didn’t it draw traffic or engage readers?

Also notice the “last edit” date. Hubpages doesn’t care when you last updated. All it cares about is that the article is still drawing readers who are interacting with (or at least reading) it. 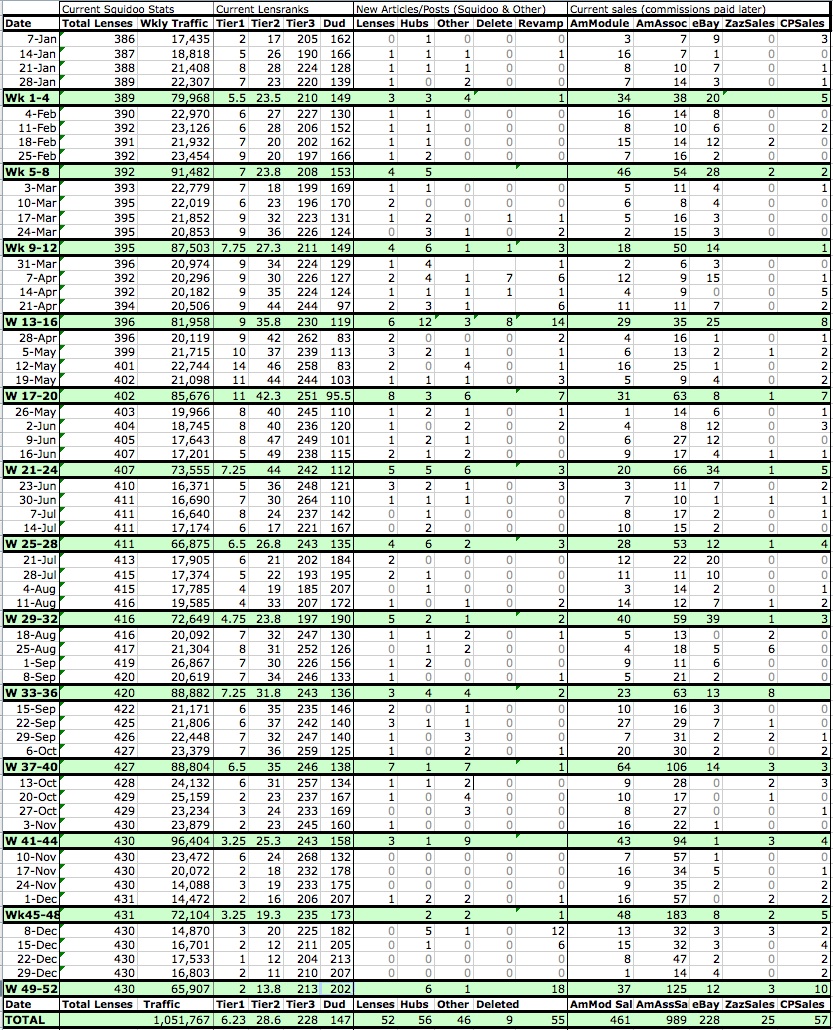 Whew, 2012 was quite a roller coaster of a year for me on Squidoo and beyond.

The good: I achieved a 68% increase in online earnings, and I began an earnest push to diversify beyond Squidoo, and succeeded at least a little (see bottom of my payouts chart).

The bad: Pinterest members began copying and uploading our photos en masse, so that we were competing with ourselves for image traffic, and third-party websites began using pinned images to make money. Hubpages, where I’ve had the most luck in diversification, had its Google ups and downs and its share of disruptive policy changes. Later, along with many Squidoo members, I lost 34% of my Google traffic to Squidoo around November 15. Accordingly, my November Squidoo earnings saw a 33% drop, when normally my November earnings are up. December saw a couple of Squidoo Surprises that required emergency triage to all our lenses. Also, the old by-and-for-lensmasters SquidU community was closed down by HQ and resurrected by Christene.

I’m tired. I’ve been tired. All of the above, plus arthritis, have left me exhausted and discouraged. So I’ve been taking a break from Squidoo and article sites in general. However, January’s almost over, and it’s time to get back in the saddle.

This year, rather than writing new content on Squidoo, I’m mostly going to write elsewhere and just do maintenance on my Squidoo portfolio.

Here’s a checklist of what I do to update each lens. I’m not gonna do all these changes on every lens all at one sitting. Instead, I’ve created an “Update log” spreadsheet with “type of update” as the column headers, lenses as the rows. When I make an update, I’ll note it in the appropriate column/row with the date.

END_OF_DOCUMENT_TOKEN_TO_BE_REPLACED

…Mostly so I can remember what the heck I did later.

So there’s this recipe I kept meaning to write up. I can’t lug the desktop computer down to the kitchen, and I’ve basically switched over to doing work on the iPad.

Turns out writing up the recipe was as fast as cooking it, so I could do both at the same time.

Needed apps: Pages (there’s also a desktop version of this which may have the same template). Something to transfer files over to one’s desktop computer (like Dropbox) or to the web (like FTP Client Pro).

At this point I had the PDF uploaded to my website’s server. That’s the “Printable Recipe” link on the lens.

Alternatively, at the “Choose Another App” stage I could’ve chosen Dropbox and uploaded the file to my Dropbox. It then would’ve been accessible in the cloud via any of my computers with Dropbox installed. From there I could’ve uploaded it to my web server like any other file. But FTP Client Pro saves a step.

I then wrote nearly all the lens on the iPad, copying the instructions from my Pages file to the Recipe module. (I used a Big Arrow Link to point to the PDF version uploaded to my server for the printable version because it looks better than Squidoo’s printable. Also, clickouts.)

Unfortunately, for the lens photo, there’s still no way to upload a graphic on iPad: you have to go to a traditional computer and upload the photo there. (I just sent a suggestion to SquidHQ to work on this.)

Everything else is incredibly easy to do on iPad.

I’m always fiddling with ways to display Amazon Associate links with big bold images and appealing layouts so they get more clicks.

I’ve got a few tricks I use all the time. They’re fast, and I do them almost without thinking about it.

Unfortunately, when I try to explain them, they look scary, because the code Amazon gives us is scary, then I have to insert minor tweaks.

Which is why I’ve filed this Squidoo Tutorial under Advanced CSS. For old Squidoo hands, it may be useful; for new Squids, it’ll probably make your head spin:

Hopefully they will prove useful to somebody.

Don’t Listen To Me

This is an unsolicited, sincere, enthusiastic endorsement of a site on writing marketing copy and killer online prose.

But don’t listen to me. Listen to Copyblogger.

For instance, check out the Magnetic Headlines ten-part lesson.

The site is chock-full of actionable, useful advice you can use right now to grab, hold, and tempt your readers to buy and click.

Make yourself a cuppa tea, coffee, or your favorite beverage. Take a break and explore the copywriting tips on this site. You’ll be so glad you did.

If the Nexus Tax Killed Your Amazon Associate Account

… you can change your Amazon Associates links on Squidoo to Squidoo’s Amazon associates ID instead, and then get at least some commission. You know the drill: Squidoo collects about 8.5% commission due to its high volume, then pays us half of that, so you’ll be making less than before (assuming you were making 6% or more). But at least it’s something.

Flynn got on the ball before I did and wrote a Tutorial on How to Change Amazon Associate Links to Use Squidoo’s ID. Obviously, this will only work on Squidoo, which means “eggs in one basket” syndrome all over again, and we’re screwed if Amazon shuts down its New York program (where Squidoo is based).

Non-Giants have been frantically reporting a page break problem for a few weeks: our multi-page lenses suddenly had their page breaks destroyed, so they’re all piled together on one long page that nobody could read. In many cases, the conflation of too many video, eBay, and/or Amazon modules on one page has caused loading problems.

Well, now we know why. In a misleadingly-titled announcement, “For Giants: A special note about the Page Break Module,” we’re told that the page break module “experiment” will be going away for Giants in a week. Apparently SquidHQ forgot that this module was released to ALL members of Squidoo, and they didn’t see the bug reports.

On the one hand, the page break module was not very well implemented. We had to create own page-to-page navigation at the top and bottom of the page via a navigation menu or the “Big Arrow Link” module. On the other hand, some of us had mastered Page Breaks and found them to be powerful and useful.

The Page Break allowed us to write a multi-page article such as my How Google’s Panda Update Impacted Hubpages and Squidoo, which needs to be  that long to cover the topic adequately, but does better broken into pages like a standard news or expert article (think WIRED magazine).  The page break also allowed us to create a themed lens on a big topic, like my Volcanoes lens, which was originally a single-page lens, later divided into subtopics. I used my lens traffic stats to guide me on what sub-topics to focus on in more depth, addressing common visitors’ queries and using the keywords they used most often to title the sub-pages.  Traffic increased exponentially as a result of my responding to my readers’ wants.  I’ve done the same with some of my other most successful lenses, resulting in my best Squidoo traffic and 2 top tier lenses.

In my non-Giant niche account, I used the Page Break to create a holiday buyer’s guide to an entire line of collectibles. There’s no way to do this on one lens, since there were too many products. Instead, I divided them up into the sets in which they were released, groups of six to eight, with personal reviews, photos, Amazon and eBay modules on each item in the set. It took so many weeks to build that I only caught the end of the holiday season, but it’s my top seller in my niche account — or was, until the loss of page breaks killed it.

So, RIP, page break. How do we recover this lost functionality?

END_OF_DOCUMENT_TOKEN_TO_BE_REPLACED

Since my lenses tend to be looooong, I tend to develop various strategies to help folks navigate them. I like little inset tables of contents, “shortcuts” that jump to relevant parts of the page, or navigator bars.

So I was working on a Fancy Tables of Contents tutorial collecting my various ways of creating tables of contents, indexes, and the like. And I’m STILL working on it! *laugh* I can always make a small project huge. Then I have to find ways to shorten it.

Along the way — partly because people are making a big push to update or build Lensographies — I wound up spinning off one module onto its own page. So at least THAT tutorial is finished:

It lets you do three things a regular Featured Lens Module can’t:

Meanwhile, I’m still waiting for somebody to find the Easter Egg on my Amazing Nessie Photo, where I am offering $5 to the first person who proves (without any doubt whatsoever) that it’s fake. Whoever does so is going to get a chuckle, hopefully.

Because a fool and her money are soon parted, and I am actually trying to teach a lesson with that lens, I will give an enormous clue: