First (although many of us forget, since we set the “Lenses” tab as default), there’s the dashboard’s Daily Digest:

So much for Daily Digest. Turning to the Lenses tab where most of us do our stats obsessing, we get: Rank, Rating, Visits, $$$, Edited. 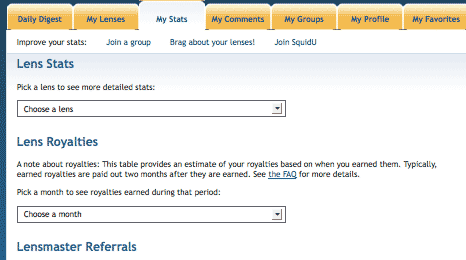 Last but by no means least, each lens has three pages of individual lens Stats.

But this post is getting so long I’m going to break it into 3 parts. Okay? Okay. Stay tuned for Squidoo Dashboard Secrets Continued.