Hubpages has set up a new help forum for Squidoo members making the transition to HP.

As expected, HP is transferring accounts a bit at a time, with early opt-ins getting early transfers.

Relache reports on how her lenses looked after import and what happened to modules that work rather differently on HP.

Still waiting for your lenses to transfer? Here’s what I’m doing.

You can get it by creating a random bookmark (be sure to add it to your browser toolbar), then editing the bookmark in your browser’s bookmark editor and changing the URL to the following mini script (scroll right in the code box below to make sure you copy all of it):

Click that bookmarklet while you’re logged into Squidoo, and it’ll ask for a lens URL  — just the stuff after http://www.squidoo.com/ — and then it takes you to the 90-day traffic pane for that lens. Be sure to click the “see more” toggle at the bottom of the keywords list to grab ‘em all. Save ‘em to a text document with all the keywords for one niche, and they may give you some ideas about the sorts of things your primary audience is looking for.

I’m trying to collect the keyword data for my favorite niches and top hubs. That’s not something HP is going to preserve.

SPIRITUALITY WROTE [on the hubpages forum]

GreekGeek – any idea how hubs are organised on our profiles? What determines their order?

Yep! By default, they’re sorted according to [Hub]Score, but there’s lots of other ways to sort & filter. Pardon my scribbles… 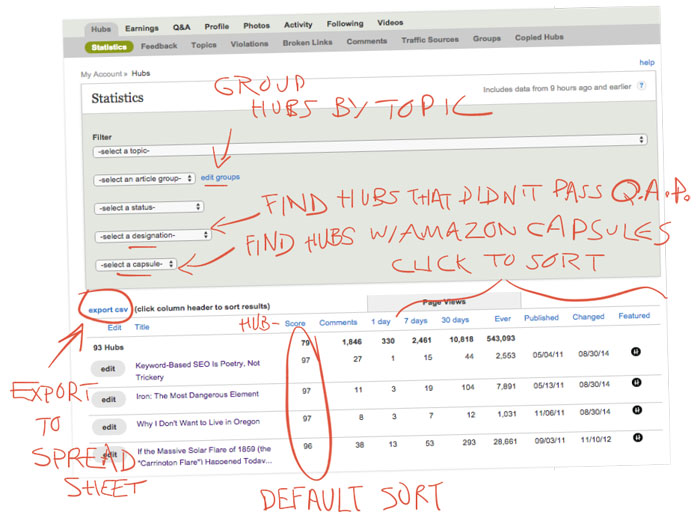 Click the top of any column to sort by that column. “Published” is original publish date (Hubpages will keep our lens creation dates). “Changed” is the most recent update. Or sort by traffic to tackle popular articles first.

“Export as csv” creates a tidy list you can import into a spreadsheet and use as a to-do list.

Hubs > Groups  Create new groups. Scroll down on that pane for “orphaned hubs” which you can add to groups. You can also add a hub you’re editing to groups in the “Display Options” pane in the workshop sidebar.

Warning: Hubpages asks us to limit groups to hubs that are relevant to one another. Each grouped hub gets a “Next” and “Previous” link at the bottom, passing traffic to the adjacent hubs in the group like a webring. Therefore, we can’t set up groups for our own organizational purposes. (i.e. no “hubs I need to work on” group.)

The filter pane  (beige box) has some useful sorting functions for finding hubs that need work. For example…

capsule > Amazon
…lists all hubs with an Amazon capsule. Or look for hubs with eBay capsules, or hubs with Photo capsules (although that’s probably all of them).

As we revamp our imported lenses, the sort by “Changed” (last edit) is going to be the most helpful option, and I also highly recommend “export as csv” and plugging the result into a spreadsheet, which you can then use to cross off those you’ve updated.

EDIT: AND I TOTALLY FAILED TO ANSWER SPIRITUALITY’S QUESTION. Hubs on our profile are displayed to the public according to creation date, newest to oldest. I have found no way to sort them.

UPDATE: This post is now obsolete, as Gil has continued tweaking the new activity stream and has taken our suggestions onboard. There are now TABS that let us filter our Squidoo activity stream according to sales or other specific info we might want to see, and the data goes back more than 200 entries. YES! THANK YOU, GIL!

Squidoo is testing an update to our Dashboard. Squidoo quests, LOTD, and HQ announcements appear in the Activity Stream. Participation in polls has been removed. Participation in quizzes is still there, for the moment. The stream gets truncated after listing 200 items from our own lens activity, but will show HQ blog posts, LOTD notifications, and other HQ announcements going back a month (I think).

The revised version has been unrolled for many Giant Squids, so it’s gotten my two big Giant accounts. The sales data that I rely on has now been lost, and cluttered up with a bunch of things I used to filter out using Fluffanutta’s Workshop Add-on from SquidUtils. I wanted to share this comment I made in SquidU’s discussion of these changes, because I think it’s an idea that has broader applications:

I would’ve loved if they’d just made Fluff’s tool canon and then added a set of checkboxes that stuck, so we could set our dashboard up once and for all to show the stuff we care about.

I’m a victim of the A/B testing. It only shows the 200 most recent items from lens activity. For me, that’s 100+ people taking my quizzes, and there’s not even a day’s worth of sales records. Every Sunday, I sit down and review my sales for the week. I’d grab the info right out of the activity stream and GREP it into a tab-delimited chart that I could plunk into Excel. Now there is no easy way to do that.

Every one of us has a different lens profile and different goals. Some people may WANT to track how many quizztakers and polltakers they’ve got. Maybe someone’s built some polls for research purposes and honestly wants to see that. Whereas others of us are here to earn a living and don’t want the quests, monsters, and points cluttering up our dashboard — we’re only interested in real-world results. If we could customize it to fit our needs, instead of being mashed into what Squidoo thinks we should use Squidoo for, that would be really great!

I loved Fluff’s tool because it did exactly that: let us focus on whatever we think is important.

It’s hard to make custom tools that show different information to different users. It’s much easier to extrapolate what most people use a site for, and create an interface tailored to that particular kind of user, figuring that everyone else will manage anyway. Big sites like Squidoo have so many features and stats (yay!) that it’s hit the point where they can’t show everything. That’s a given. But what we’d love is to be able to tailor those features and stats to suit our own needs, instead of being given the options package the car dealership thinks we want.

It was fun for the first day in the half, but I am tired of having to go to Alberta by way of Atlanta. (TWA frequent flyer program — I hold long grudges.) Therefore, here’s a shortcut to the Squidoo login pane.

Don’t bother logging out. Just go to that URL and you can log in and get back to work.

Thanks to TheFluffanutta of SquidUtils for reminding me of this.

LisaAuch asked a good question in SquidU on how we update lenses (which could apply to any kind of webpage). My answer got longwinded, so I’m posting it here!

95% of the time, I confess, I assume I made a good page and don’t update much. I’ll just skim titles and images to see if anything jumps out at me that I could tweak. I’ll trim a word or two since I tend to be longwinded. Then I hit publish.

During the 5% of the time when I decide to make a significant update, it’s for one of four reasons:

With 3, it’s often because I’ve learned a new SEO method I didn’t know before. For example, using words and phrases from searches related to my main keyword, rewriting titles so that the most significant keywords are at the start, or reviewing images to make sure their filenames and alt-names are concrete words and phrases like “pictures of the statue of liberty” that people are more likely to search for (as opposed to, “liberty”).

One time consuming but powerful method is to

use traffic stats as clues on how to improve a lens

END_OF_DOCUMENT_TOKEN_TO_BE_REPLACED

My Squidoo Lensrank Has Dropped: and That’s a Good Thing!

Doot de dooo. Time to check the dashboard and see how the lenses are doing. Hm hm hm, good good, hey, that’s one’s back in the second tier, and…

You’re picking on me! No, wait, you’ve changed the lens algorithm to cheat me out of my rightful lensrank! It’s a conspiracy! It’s a bug! It’s inconceivable!

And it’s been happening with that particular lens a lot lately.

In fact, this is a VERY good thing.

END_OF_DOCUMENT_TOKEN_TO_BE_REPLACED

My theory about Lensrank is that most Dashboard stats are used to calculate Lensrank, although we have no idea how they’re weighted. Otherwise, why is Squidoo taking up huge gobs of server time and space to crunch those numbers for hundreds of thousands of lenses each day?

I have been away for a while, and just noticed a third stat added to the Traffic stats for a lens:

EDIT: Oh, but what IS pages/visit? No, it’s not how many times your visitor comes back to the page, as I had thought. Fluffanutta explains: each lens now has sub-pages aka “Module pages,” so this gives you an idea how often visitors are going to those pages as well as the main lens.

Lakeeerieartist has a great lens explaining Module Pages and what they’re good for.

Here’s two easy steps I do as a quick “freshness boost” for a lens about to slip past the bottom of its tier. It’s no substitute for adding new, updated, exciting content, but it’s a quick fix.

Voilá! Publish, and you’ve just updated your lens, which can give it a small ranking boost. Again, you can’t always cheat like this — sometimes you need to add new content! — but we can’t be rewriting all our lenses every day.

The Squidoo Dashboard: What Lens Stats Tell Us

Welcome back to the third and final segment of my “Lensrank secrets” study. In Part I we squeezed the Squidoo FAQ for every scrap of information it could tell us about lensrank. In Part II, we tackled the Squidoo Dashboard stats, on the theory that most of those factor into lensrank (the FAQ showed that many do). Whether or not they are all lensrank factors, they certainly give us a lot of clues about how to improve and promote our Squidoo lenses.

Now I’m going to finish up with an in-depth look at the “individual lens stats” part of the Squidoo Dashboard.