Subdomains: That Is the Question

Thanks to Hubpages’ June 2011 experiment in subdomains as an attempt to get out from under Panda, Squidoo is in the beta testing stage of something similar. Hubpages’ subdomain experiment picked up a lot of buzz when it landed in the Wall Street Journal, and I was one of many who was excited by the possibilities, since I thought it made sense. SearchEngineLand, one of the better SEO journals out there, made cautious noises and checked with Google (see that article for Google’s response).

Based on Google’s responses and Hubpage’s traffic rebound (see below), I thought subdomains couldn’t hurt and might help, and said so. However, after more pondering, I’ve joined the ranks of Squidoo members who are concerned. Apologies for the about-face. Let me explain.

Subdomains are the first part of a url, the “www” in many domain names, which actually may be changed to something else. For example, after the subdomain switch, all my hubs on Hubpages start with this URL: greekgeek.hubpages.com. That misses out on one advantage of subdomains: getting a keyword relevant to one’s niche right at the start of the URL. It does, however, ensure that all my content is grouped under a subdomain that is separate from any other Hubpages user’s.

Panda is all about judging content by domains. If there’s a lot of spam on a domain, Panda’s algorithm ranks the domain lower, and then Google’s day-to-day algorithm uses Panda’s ranking as one factor in judging each page on the domain. Having a page on a poorly-Panda-ranked domain is like being a winning player on a losing team: your chances of being awarded accolades like MVP are lower, no matter how hard you play.

In theory, subdomains could help mitigate “winning player on losing team” syndrome. Search engines may judge content within a subdomain on its own terms. This is both good and bad on large sites like Hubpages and Squidoo. It’s good, in that your quality content may set your pages apart from that of scrapers and poor writers. It’s bad, in that (a) you may lose some of the domain clout you enjoyed from the host site, (b) it will take newbies longer to build up domain authority, and (c) if you’ve already got content, the SEO benefit of all the backlinks to it may be less since they must now pass through a 301 redirect (like a detour sign; it shows where the page has moved).

There’s two other issues to consider when implementing subdomains on Squidoo. One, we already have a way for search engines to identify content by author, which should help keep better authors from being tarred by association. See my rel=”author” post. That makes the “grouping by author” advantage of subdomains redundant.

Two, Hubpages was taking the risk of implementing subdomains because it had gotten clobbered by Panda, so it had nothing to lose. Most of the Hubpages members discussing the subdomains issue were reporting that Panda had de-indexed all their hubs on Google, so that they no longer appeared anywhere in search results. Whereas the subdomain switch caused many but not all hubs to be re-indexed. Squidoo did not show a significant drop from Panda, and we certainly didn’t have tons of lenses disappearing from Google. For us, it’s more of a risk to tinker with site structure.

Furthermore, there’s often a “freshness boost” when you create a new domain or webpage which wears off after a few months. Hubpages’ recovery remains hopeful so far, but will it hold? (I don’t expect it to return to pre-Panda levels, because there’s a spectrum of good and bad content on the site which Google is now better-equipped to distinguish): 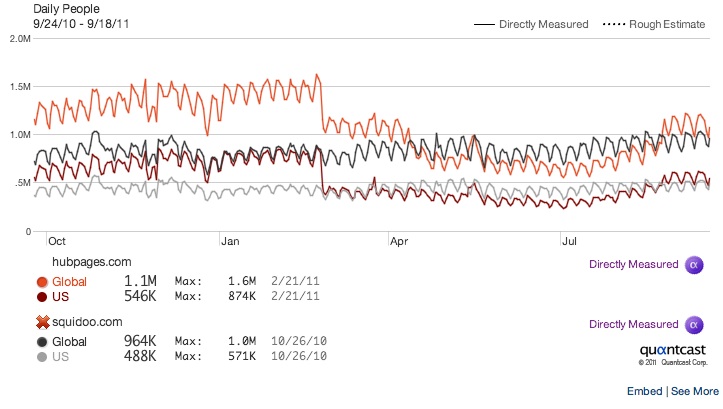 And how did that translate to users on the ground?

There’s a 99-page thread in which users discuss their experiences. I started to compile a chart of their responses to get a sense of how many people were seeing traffic up vs.those with traffic down. However, it’s still not a long enough span of time to be sure, and there’s too many variables, so I’m going to be lazy and summarize:

At the start, many of the early adapters saw traffic improvements about a week after switching to subdomains. There were a few reporting “unchanged” but very few reporting “down.”  As time went on, the traffic was more choppy…some lost traffic, some continued to see gains. From what I’m seeing, many saw traffic rises but not to pre-Panda levels. A smaller number reported drops or unchanged.

But in nearly every case that reported an uptick in traffic, they also reported that their pages had been de-indexed by Panda in Feb/Apr, and reappeared in Google’s main index after the subdomain switch. So of course their traffic would drop like a stone, then climb back up once Google indexed them again. My guess is that Squidoo will NOT see a similar effect, since our pages haven’t been de-indexed by Panda.

And that is the reason why I have revised my opinion of whether this is going to help us.