No, I will not be taking advantage of this new “opportunity” to label my lenses for Facebook’s Open Graph ( — there, that’s better). Why?

Or, in case you’re laughing at silly old Greekgeek and her quaint Facebook phobia, let’s review:

What the CIA failed to do in 60 years, Zuck has done in 7: knowing what 800 million people–more than 10% of the world’s population–think, read and listen to, plus who they know, what they like and where they live, travel, vote, shop, worship. — Forbes Magazine

Facebook is a big steaming pile of p….rivacy violations, a site designed to collect more and more more personal information from its members to sell to its advertisers. And it started with a Big Lie.

Originally, Facebook enticed users to join with promises of community and sharing their personal lives with their closest friends. Then Facebook turned their private info public and started selling previously-confidential information. Enter the Facebook Privacy Erosion Cycle: privacy protections would come down, savvy users fought back, Facebook promised not to do it ever again, then did it again a few months later, repackaging the launch slightly. Rinse and repeat, until Stockholm Syndrome wore down users’ reservations, and Facebook could get onto the next personal-data-mining push.

“Privacy is dead!” Zuckerberg trumpeted again and again. “This is what YOU want! It’s an OPPORTUNITY!” And then he made another million selling people’s personal info to his advertisers.

Or take Zuckerberg’s word for it. Remember, this is what he said soon after he started the embryonic Facebook:

Enter Open Graph. Open Graph is Facebook’s latest attempt to collect, codify, and spy on its users’ web browsing activities. It’s trying to get us to “integrate” our off-Facebook content with Facebook so that it can collect ever more specific information on our readers and visitors’ viewing habits outside of Facebook’s garden wall. It’s doing this because it’s maxed out the amount of content it’s milking from its own users. Now Facebook is asking us to assist it in collecting information about users when they stray from its walled garden.

Again, don’t take my word for it. Here’s a good discussion of Open Graph by TIME’s tech blogger. 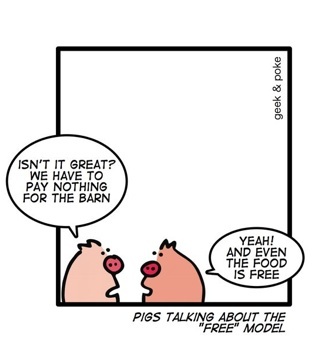 The "Free" Model by Geek & Poke

Yes, Google is also guilty of exploiting us as its personal piggybank, but that does not make it better. I have a few bones to pick with Google. However, Google never presented itself as a social community for sharing personal information with your friends, then tried to redefine the meaning of friendship itself in order to collect information for advertisers. That’s bait-and-switch. At least Google was up-front the start that its goal was to collect and index any published information it could find.

Facebook has not earned my trust.  It may claim it’s the web, just as AOL did in the 90s, but it does not deserve to be the web. Therefore, I will not let it gather information on my readers, and I will not assist Facebook in its bid to take over the web. (Update: it may be impossible to stop it, of course, since Facebook tracks and records all web browsing of non-members as well as members, once they’ve visited any Facebook page.)

Oh, and speaking of “opportunity,” I’ve been seeing that word being used in a strange way lately. To quote Inigo, “I do not think that word means what you think it means.” I keep seeing “opportunity” used in the context of someone  trying to exploit my content for their benefit. How very Zuckerbergian!

Think hard before sliding down the slippery slope to Zuckerberg perdition. Remember, there are— or were— alternatives.

Twitter is starting to win the social media war, because it does not go down the Facebook route.

With Squidcasts, I was communicating directly with my readers who were interested in the subjects I was writing about.  With Squidcasts, I was able to give them highly-targeted, relevant info specific to their interests without collecting data on them, without forcing them to sign up with a social network. They got the benefit of my content, my tips, my recommendations— for free!— and it kept some of them coming back. They chose whether or not to subscribe to a particular article’s Squidcasts, and they chose how to use the info I gave them, rather than the other way around. My traffic dipped slightly when Squidoo took Squidcasts away. Yes, Squidcasts were a bona-fide “opportunity,” and now they are a missed opportunity…as in, “I miss them.”

Meanwhile, lately, I’ve seen other “opportunities” promoted on Squidoo— contests and such— only to find I’m excluded from those “opportunities” because they only exist through Facebook pages where I can’t participate without turning over my personal info to Facebook.   When I signed up with Squidoo, Squidoo was not Facebook, and did not require me to be a member of Facebook to participate in Squidoo.

Squidoo is better than that.