Here’s yet another search result puzzle which tickles my curiosity.

Background: A lensmaster posted a complaint about Zujava and Wizzley cracking down on spun/duplicate content.

So I went to look up Google’s official word on spun/duplicate content instead of just saying, “ARGH! DON’T FILL OUR BEAUTIFUL WEB WITH ENDLESSLY REPLICATED JUNK NO HUMAN WOULD READ!”

We know that penalizing sites with lots of duplicate content is an integral part of the Panda algorithm. But wait…that’s a penalty applied to an entire domain. Does the spun content creator care what they’re doing to the host site’s Panda reputation, if spewing out a lot of low-quality junk in a hurry gets SOME traffic and SOME income?

True, Google is sending warnings about duplicate content to some webmasters, but it sounds more like warnings for exact copies of pages, not spun/reworded/paraphrased copies.

In the course of searching for answers, I Googled “spun content penalty” . Look closely at entries 2-4 and 6: 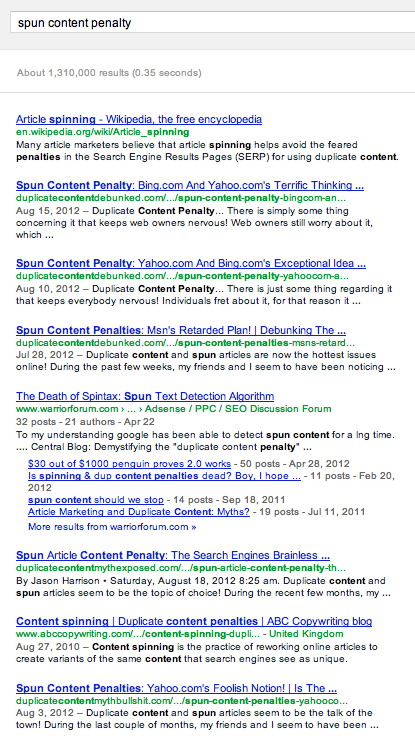 I’m not going to link to those websites because it’s obviously somebody running an SEO experiment, and I don’t want to give him more fodder.  My linking to it would further skew the experiment. But wait, there’s more! 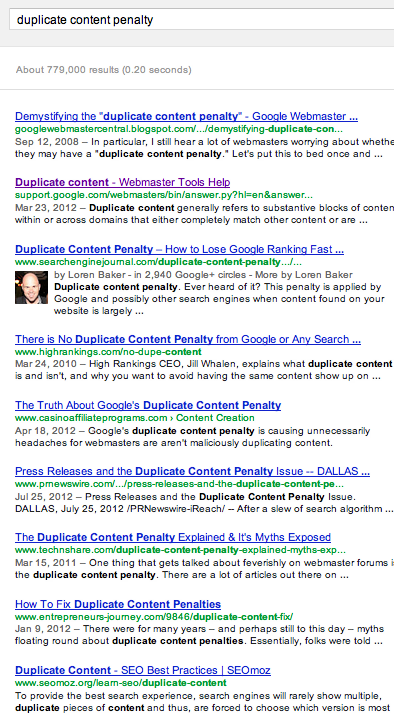 Well, no. My bet is that there’s a lot more good articles out there discussing “duplicate content penalty” than “spun content penalty,” so it’s harder to rank highly for the former than the latter.

I’m so intrigued by this random SEO person’s experiment that I’ve nearly forgotten what I was looking for. What have we learned from his test… if anything? That Google’s attempts to detect and block spun and duplicate content are still imperfect? (Or, perhaps, enough people have noticed this experiment and are linking to it to keep it in Google’s sights?)

I do think people are a little too uptight on duplicate content. Even when Google decides to display one copy of an article and not the other, the duplicate copy isn’t earning a penalty, it’s just that Google may decide to show only one version. Do you mind that much? You still got the Google traffic to at least one of them! (Unless the winning version is a scraped, illegal copy of your website. Ouch, Google.)

On the other hand, I think people are not careful enough with spun content. That’s playing Russian Roulette with Google.  Google’s quality rater guidelines defines webspam as any practice done to manipulate search engines. If you’re writing spun content, blurting out ten different versions of an article to embed links promoting a website or just to make more money online with advertising, you’re clearly not doing it for human readers, who will get no benefit from reading a reworded version of the same article. Sooner or later, Google may sniff out your article spinning tricks and nail you.  So you may get away with it for now (or not), but it’s not a longterm viable strategy.

Also, it fills the web with gratuitously reworded junk that’s obviously not fit for human consumption. Tim Berners-Lee didn’t invent the web for you to waste it! (Or at the least, if you’re going to fill the web with pointless content, go out and slap a funny caption on a cat photo.)