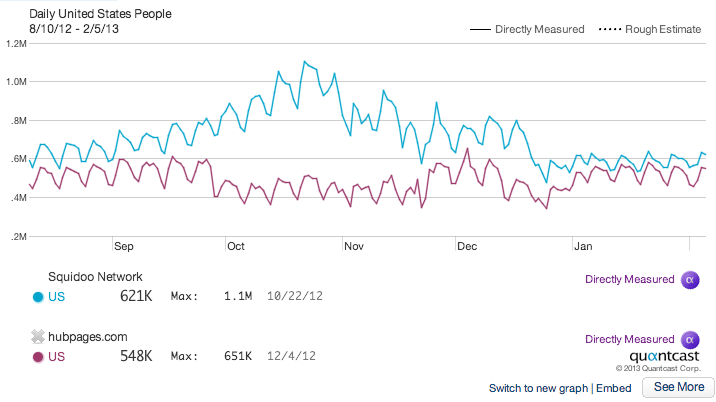 Google Analytics shows how mobile traffic changed on my own pages before and after Squidoo’s December 7 update. (However, the major Google search traffic drop that hit my Squidoo pages on Nov 16 also hit my mobile traffic, so some of this is signs of anemic recovery rather than a response to Squidoo’s new layout).

In other words, mobile trafic has gone up on both sites, and on Hubpages that has nothing to do with layout changes, just the fact that mobile traffic is increasing everywhere.

So what? Mobile traffic will continue to grow. The question is, what is that mobile traffic doing and looking for? If you answered, “to buy a specific product,” you may be disappointed. See this article I wrote last October: How The Shift to Mobile Impacts Online Writers’ Bottom Line.

Google Analytics tip: Choose Mobile > Devices, then, in the tiny blue links below the main table, choose “Screen resolution” to see what screen sizes most people are using to access your pages.  Then use this Responsive Layout Tester to check how your page looks on different phones and tablets, and at different screen sizes.

As a side note, using my iPad, I was able to build hubs from scratch on Hubpages starting in August of 2012, whereas despite Squidoo’s announcement that it now has a Responsive Layout workshop, it’s still impossible to upload images or reorder modules. This means that Hubpages is the better platform for writing travel articles, if you want to post something while you’re on the road.