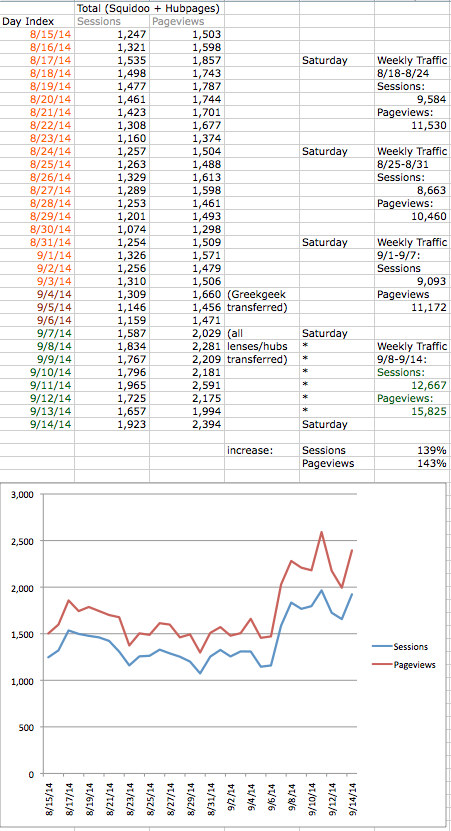 Bottom line: during their first full week on Hubpages, my transferred lenses’ traffic is up about 140%. And that is AFTER I deleted over a hundred lenses.

And here’s good old Quantcast showing how lens transfers from Squidoo are impacting Hubpages traffic as a whole: 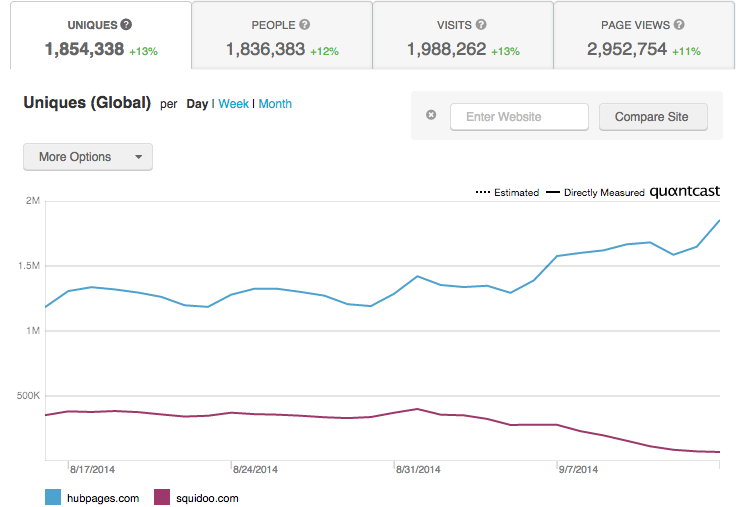 The “Set Up Your Transfer” button is still showing on my Squidoo dashboards, so that means more lenses will continue to be moved across each day until October 1st when the remainder will be moved.

In other words, the increase in Hubpages traffic is more than the daily traffic was for Squidoo, and that’s even before all of Squidoo’s content has transferred over.

Which is consistent with what my own lenses show: the same articles are drawing more traffic after moving to Hubpages. Obviously, this should be true if Squidoo is suffering under a bigger domain penalty (Panda) than Hubpages is, but it’s nice to see the numbers confirming it.

Again, I think it is vitally important that we convert our lenses to match the spirit of Hubpages. Let’s not be rules lawyers, trying to wear down Hubpages staff until they give in and let us make Hubpages more like Squidoo. Hubpages survived Panda — barely. Squidoo didn’t. We’ve gotta give in and do as the Romans are doing.

I won’t be taking down my existing product lenses, but, for example, I didn’t try to replace the Amazon Plexo on my Airline-Approved Cat Carrier lens. Instead, I pruned out all the “visitor might like this” Amazon modules and left only the “I know this is what they want” products. I asked myself where I really, truly thought the article needed the ones I kept.

On my Where to Find Free (Legal) Web Graphics lens, I removed my recommendation to use Allposters, along with affiliate lins. Likewise,

On my Jackie Robinson lens, I removed the Allposters I’d used to illustrate it and searched Wikimedia, Library of Congress, and Creative Commons on Flickr to find new pictures. (In fact, I found better-quality ones). I also chucked about 5 other books I’d listed in Amazon modules for the Jackie Robinson lens and simply retained the best of the batch.

On my 25 Funny Things on Google Maps lens, I removed a gazillion clickouts (I’d been linking to Google Maps because the Squidoo Google Maps module was broken), along with various links to related Amazon products and Zazzle designs. They weren’t essential. So they’re gone.

In other words, I’m pruning. And I don’t intend to do any more “Top ten X” articles (e.g. my “Top Ten Mythology Books” lenses). Instead, I’ll be doing more of the Jackie Robinson variety, or — maybe — the cat carrier variety, which zeroes in on one product I’ve used and can write something about that’s more than what a visitor would learn if they read the customer reviews on Amazon itself.

Above, I gave you a chart of the combined traffic stats for all my Squidoo articles both before and after they transferred across. Here’s the raw data I consolidated to create that chart (click for full view)

The “SQUIDOO” columns at left are  data imported straight from Google Analytics. The gray “Hubpages” columns are also the raw data imported from Google Analytics.  Again, back when I started on Squidoo, I used the same tracking code for all my accounts. So, in order to do a one-to-one comparison, I created the “HUBPAGES (COMBINED)” column to add up the data for the 3 transferred accounts (in gray).